Onion prices can be as high as Rs 100 per kg

Onion prices are on the rise in the country. Prices have risen sharply in the biggest onion market in Lasalgaon, Maharashtra. The government, however, expressed confidence that prices would fall due to the ever-increasing supply. However, two days later, onion prices in Lasalgaon market rose 10 percent on Monday. In Rajkot Yard of Gujarat, the price of 20 kg is 271 to 805 rupees, while in Gondal yard the price of 20 kg is 300 to 1101 rupees. Onion price in local market of Ahmedabad is Rs 65. 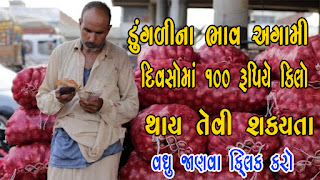 Such an onion price

People are annoyed by the rising prices of onions. The wholesale price of onion rose to Rs 55.50 per kg on Monday. He is a four-year top level player. Earlier in early August, it was priced at Rs 13. The retail price of onion has increased from Rs 20 per kg to Rs 80.

Onion prices can reach Rs 100 level fast. Onion prices in the retail market are between Rs 70 and Rs 80. In the last three months, onion prices have seen a fourfold increase in wholesale sales during this period.

Due to this increased cost

In this regard, traders say that onions were produced very little last year. This is seeing an increase. Onion crops have been damaged due to poor rainfall. Apart from this, traders have blamed the government's adverse policies.

On the other hand, Zaidat Holkar, chairman of the Agricultural Produce Marketing Committee (APMC) of Lasalgaon, said that there was a slight rainfall in October and November. This has damaged the crops sown in Kharif. Early onion sowing in South Indian states, including Andhra Pradesh and Karnataka, has been damaged. This is why the supply of new onions has not increased in the market.