All private details of users have been obtained by installing malware on the phone via Facebook, WhatsApp video call, which was announced in April-May in connection with the espionage of about 1,400 people from 20 countries including India. 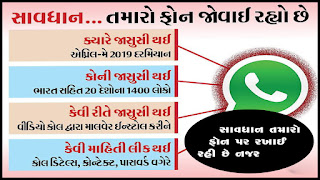 Shocking details have surfaced that users have been spied on through WhatsApp, the most popular social media platform in India. The government of India's Information and Broadcasting Ministry has also urged WhatsApp to provide all details after the official acceptance that users of other countries including India have obtained private details through Israeli spyware through WhatsApp.

On Tuesday, Facebook filed a complaint
During April and May, malware was infiltrated by Israeli spyware using WhatsApp's servers on mobiles of nearly one and a half thousand users, using which to retrieve user's personal details. The victims of espionage include journalists, intellectuals, activists and top officials from a total of 20 countries, including India. A complaint has been filed against WhatsApp parent company Facebook on Tuesday over alleged cyber security company NSO after receiving details of the entire incident.

What precautions did Whatsapp take?
The exact figure of how many people are victims of cyber espionage is not yet known, but there are currently estimates of around 1,400 people in 20 countries. The malware has recently been disabled by WhatsApp and people who have been victims of it are being personally notified by phone. Notably, Facebook announced in May that a serious cyber-attack had failed.

How Does Spyware Work?
The spyware name used to get the details of WhatsApp users is Pagasus. Whenever you make a WhatsApp video call or a video call comes into your mobile, cyber attacker issues a code. Even if you do not receive a video call, malware is installed on your phone through this code. Then your phone's call details, voice call, password, contact list, calendar event, microphone, camera usage details are leaked.

Denial of NSO
However, the allegation was denied by Israeli company NSO, and an official statement has been issued that the complaint made by Facebook will be dealt with in court. Pegasus is not spyware but valid software, which is claimed by various government agencies as well.

Hacking by video calling
According to WhatsApp, WhatsApp's video calling feature was used to hack users' phones. About 1400 users have been affected. The user was also informed of the cyber attack by WhatsApp. Lawyers for several accused in the Bhima Koregaon case, Nihalsingh Rathore, activist Bela Bhatia, Digiprasad Chauhan, Anand Teltumde and journalist Siddharth Sibal claimed to have received a WhatsApp message on a channel.
Congress government accused of espionage

The Congress has accused the Modi government of spying on the Center. He has asked the Supreme Court to come forward on this. Congress spokesperson Randeep Surjewala said the government, which spied on journalists, activists and opposition leaders, had lost the right to lead in democracy.
Government committed to protecting privacy


The government has asked WhatsApp to take steps to protect the privacy of millions of Indians. IT Minister Ravi Shankar Prasad tweeted that the government was committed to the rights of its citizens. The incident of finding a bug in the office of former Finance Minister Pranab Mukherjee during the UPA government should not be forgotten. Army Chief VK Singh was also spied on.