Due to the anger of the people and due to Diwali, the state government has twice the implementation of helmets, PUC, HSRP.If you do not have a license, RCbook, PUC or parked vehicle, you need to prepare a fine of Rs 500. 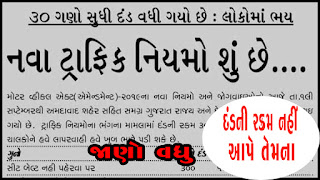 If there is no PUC and HSRP, citizens will have to pay five times as much penalty as the old ones. The Central Government has begun its implementation across the country after amending the Motor Vehicle Act. Implementation was started in Gujarat too. However, in view of the fury against the new penalties among the people, the government increased the limit of fine as per the new rules and allowed the carriers till September 10, after which the government reduced the amount of penalties in the new rules. And finally, from October 15, it was decided to take punitive action according to the new rules. However, the government had later extended compliance with the new traffic rules till October 31, corresponding to the Diwali festivals.
Their vehicles will be confiscated if they do not pay the fine

The new rules will now be in effect from November 1. Under the rules, those who drive without wearing helmets, civilians driving without seatbelts and four-wheelers with black film and three-wheelers will be charged huge fines as per the new rules. Vehicles who do not pay the fine on the spot will be prosecuted for the seizure of their vehicles.

An HSRP number plate is also mandatory
Along with this, the traffic police will also be involved in the HSRP number plate which will be punished against the violators. Citizens have been driving since the state government extended the two-term extension, but now with the introduction of new rules, such people will be prosecuted under the new traffic rules.
The purpose of the police is not to impose fines, but to protect the people

Deputy Police Commissioner (Traffic West) Ajit Rajiyan said that the new traffic rules will be implemented from November 1. The task of the police is to enforce the law. But its main purpose is to increase people's safety. The driver of the vehicle without a helmet has to suffer his family in case of an accident. The police are interested in protecting people, not penalties.
The police will hold 1 thousand hand-held devices to take penalties from the card
Under the new traffic rules, the traffic police will buy 1 thousand hand-held devices, increasing the penalty by five times. According to Traffic DCP Tejas Patel, the government has approved a budget of Rs 1 crore to install these machines so that the penalty amount can range from 500 to 5 thousand.

This penalty has not changed
Drunk Driving 10,000
25,000 for a minor
Do a traffic signal jump 5,000
Breach of rules and provision of penalties